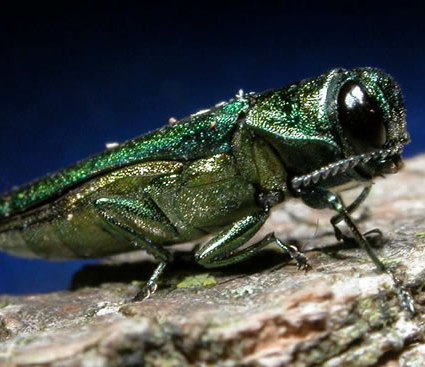 Emerald Ash Borer- Perhaps the most destructive insect of this decade

Maybe you have heard of the Emerald Ash Borer already. This destructive little insect has been in the news quite a bit over the past few years as it has left tens of millions of dead Ash trees 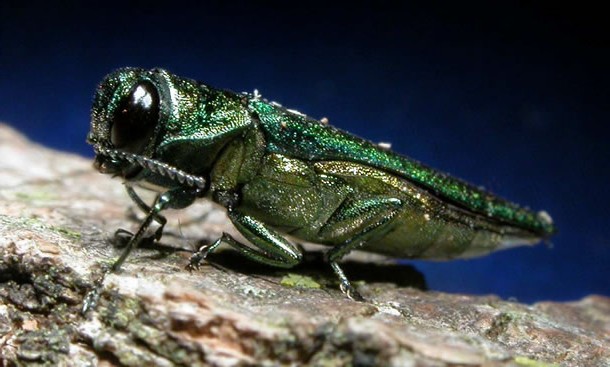 (genus Fraxinus)  in its wake as it has spread across North America. The Emerald Ash Borer (Agrilus planipennis) was first detected in here in the States in southeastern Michigan near Detroit in the summer of 2002 and has since spread to 18 states and many provinces. It arrived here from Asia, most likely in wooden shipping crates, and has become a very real threat to the survival of  The Ash species. This small beetle could very likely kill most of the 7.5  billion ash trees through out all of North America and ha cost municipalities, property owners, nursery operators and forest products industries tens of millions of dollars already.

On September 12, 2012, state forest health officials announced that a single Emerald ash borer (EAB) had been confirmed to have been trapped in Dalton, Mass. in Berkshire County on August 31st.  The EAB was found in one of DCR’s purple prism traps along Kirchner Road in Dalton. The Dalton find is the first time that the tree killing invasive pest has been found in Massachusetts. State environmental officials are expected to decide very soon whether to quarantine Berkshire County, the entire state or some sized area in between so that the movement of wood from ash trees is restricted.  Such quarantines have already been put in place in many of the affected State( see map below) , as it is thought that the EAB’s primary means of  spreading is through the movement of  wood products and infected plant stock.

Ash is a main component of the Northern Hardwood forest in Massachusetts and is a common species in the Berkshires.  Ash is also a common street tree in eastern Massachusetts. While only 5% of the forest trees in MA are of the Ash Species, 80% of those Ash are in the eastern part of the State. Ash wood products do have a significant place in the economy of this part of the State and so this insect could become a problem quite fast.   “The Emerald ash borer brings a very serious threat to our ash trees, and we are not taking its presence lightly,” said DCR Commissioner Ed Lambert. “We are taking swift action to address the infestation, and are working to mitigate any impact an infestation could bring.” 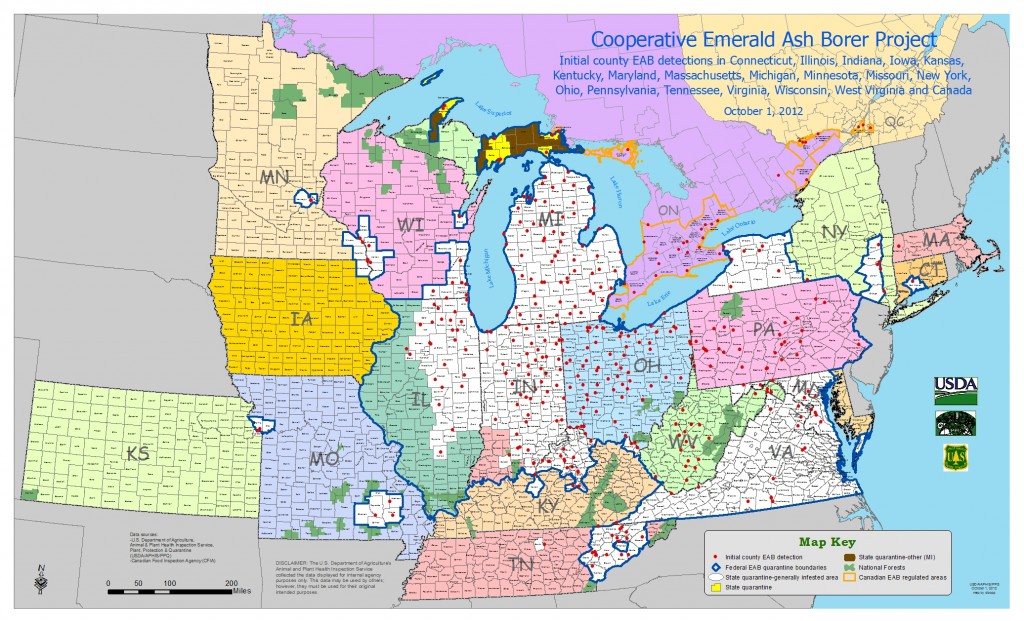 States affect by EAB and quarantines already in effect. 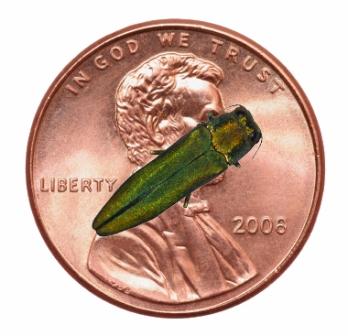 EAB Is small, 1/2 long bright metallic green beetle with a flattened back. The EAB is bullet shaped and has purple abdomen beneath its wing that is visible during flight.  The adult EAB  emerge  from under the bark from May to August to mate. This emergence will several D shaped exit holes along the stem of the tree. The females  lay their eggs in the crevices of the bark. The larvae that hatch out then tunnel  under the bark to feed and grow through out the fall and winter. this tunneling is what kills the tree as the tree’s vascular system is damaged and unable to transport water and nutrients for the tree. 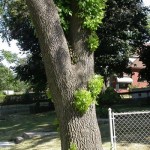 Sprouts growing from the trunk are a telltale sign of a tree under stress. 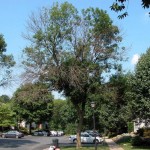 Canopy dieback at the top of the tree 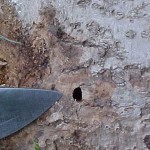 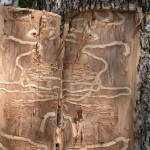 S-shaped galleries made by EAB larvae eventually kill the tree.

Follow these link for additional information about this destructive pest

Or give us a call